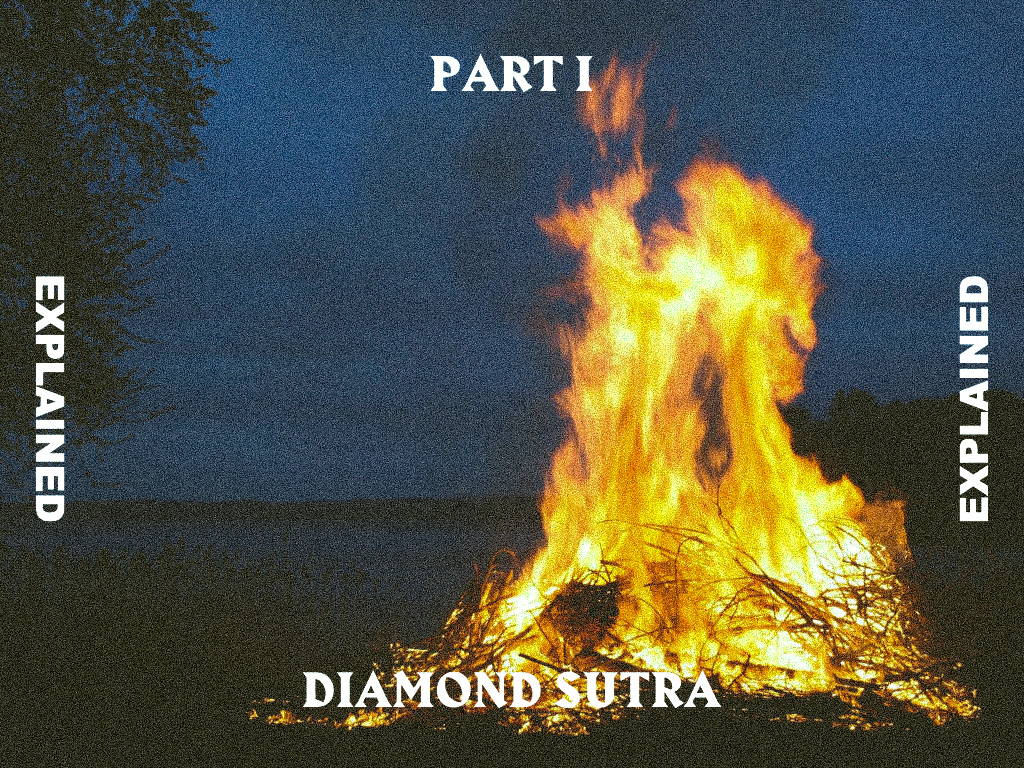 INTRODUCTION TO THE DIAMOND SUTRA

Diamond sutra. Ever hear of it?

You might have heard the term sutra before...something to do with Buddhism.

The Diamond Sutra, also known as the Vajracchedika Prajnaparamita Sutra, is one of the most treasured ancient Buddhist Scriptures in the Mahayana Buddhism, and it is particularly prominent within the Chan (Zen) tradition, along with the Heart Sutra. It is relevantly short, with only 6000 words, and like the shorter Heart Sutra, the Diamond Sutra is said to concisely sum up some of the Buddha’s most important teachings. The sutra essentially challenges multiple status quo in regards to the common notion of self, space, and reality. It has a unique way of understanding the world, presenting a set of logic to not only deconstruct the reality but also to rationalize the nothingness of all phenomena.

Since I'm going to talk about the Diamond Sutra, it's worth mentioning that I will be talking about it exclusively in a philosophical context. So I will be treating Buddhism more as a segment of philosophy rather than a religion...which I think will bring some light to its real meanings and purposes. So please relax and lay off some of the bias you might have towards religions. There will be no magic and supernatural stuff like splitting the ocean in half. Also, though I will be talking about some mind-bending logic later on in the series, the point of the series is to clarify the text, not to further complicate it. So try not to get put off by the word 'philosophy'. I will do my absolute best to make it readable as possible.

Buddhism was born in India in the 6th century B.C.E. Its founder, Siddhartha Gautama, aka the Buddha, is one of the most revolutionary thinker in the history of mankind. In fact, German existential philosopher Karl Jaspers, summed up the past 3000 years of human civilization and concluded that there were only four sages who had a profound impact on our civilization: Socrates, Gautama, Confucius, and Jesus.

Especially in the modern day, where many ancient Buddhist scripts have been translated into multiple Western languages, Buddhism has shown a signifiant impact on some of the masterminds of Western philosophy. Philosophers like Schopenhauer, Husserl, Heidegger, Sartre, and Wittgenstein share many similarities with the Buddhist philosophy. Buddhism also had a huge impact on postmodernist ideas in the second half of the last century; like how the non-essentialism of post-modernism is deeply influenced by Mahayana Buddhism. Many of you might have very little to zero encounter with Buddhism beyond its religious appearance, but it's very much ongoing, though it was born more than 2,500 years ago.

If you are a Buddhist, of course, it's necessary to have a comprehensive and complete understanding of Gautama's thinking. Even if you don't believe in Buddhism, it's still your gain to have some understanding of one of the greatest thinkers in the human history.

The name 'Diamond Sutra' is a simplified way to remember, but the proper name is Vajracchedika Prajnaparamita Sutra. The script is so important that it has been translated multiple times by numerous Buddhist masters...as if it's some sort of a competition for who can translate it better. And over time, the good ones stayed and the poorly translated ones vanished. As of today, there are mainly six translations of the sutra stored in the Tripitaka (Pali Canon), arranged in chronological order.

The first is the translation, 'Jingang boruo boluomi jing' by Kumarajiva. (402 A.D)

And the sixth, 'Fo shuo nengduan jingang boruoboluomiduo jing', by another master of the Tang Dynasty, Yijing.

Among those six Chinese translations, Kumarajiva, Xuan Zang, and Yijing Master's translation are recognized as the best translated, judging from the breadth of the spread. Among those three, Kumarajiva's translation is the most dominant one. Not only because it's so well translated in terms of accuracy, but it's also extremely beautiful in terms of nuances and fluency. In this study, we will be using the translation by Kumarajiva as the foundation, while still referring back to the original Sanskrit text.

The earliest known Sanskrit title for the sutra is the Vajracchedika Prajnaparamita Sutra, which may be translated roughly as the "Vajra Cutter Perfection of Wisdom Sutra." In English, shortened forms such as Diamond Sutra and Vajra Sutra are common. The title is composed of three words. Vajracchedika, Prajna, and paramita. Vajracchedika, translated to Vajra Cutter, is a powerful weapon that symbolizes both the properties of a diamond (indestructibility) and a thunderbolt (irresistible force). The nuance is that it cuts through the illusions of this world and ultimately reveals the reality. We're going to talk about illusions another time because what Buddhism perceive and categorize as illusion is very unique.

Now, Prajna. Prajna is simply translated to wisdom. It's described in Buddhist commentaries as the understanding of the true nature of phenomena. How and why stuff happens. In terms of meditation, it is referred to as the practice of understanding three characteristics of all phenomena: anicca (impermanence), dukkha (dissatisfaction and suffering), and anatta (non-self). In Mahayana Buddhism, it refers to the understanding of sunyata (emptiness).

And finally, paramita. The term 'paramita' is particularly important because it states the purpose of the sutra. The term is translated as 'perfection', often describing qualities of an enlightened being. So the purpose is to become perfect? Yes and No. Paramita is a complex word that doesn't really have a direct and accurate translation from Sanskrit. The nuance of the term is actually, "Crossing the River". From A to B, one bank to another. Some people interpret it as "to the other side". But what river? Which river? Obviously, it's not a geographical location. The cultural metaphor refers to the river of life and death.

This is where stuff gets a little bit deeper. Perfection...cutting through illusion...wisdom... and the river of life and death.

The simple understanding is that to be perfect (getting to the other side) you must remove yourself from all the illusions of this world, and wisdom plays a crucial role in cutting through those illusions. Therefore, to cross the river, one mustn't be deceived, and see/understand phenomena clearly, which ultimately allows you to achieve the state of enlightenment, aka Nirvana.

The tricky part is crossing the river of life and death. Not just death. Life too. This might come across a bit strange for some of you, because most of the Western cultures tend to fantasize the elimination of death: You know...immortality, resurrection, fountain of youth, medicine, and so on. But never life. I mean, you're already born when you're taking this information in. How can you un-born, or not born.

This is one of the unique aspects of Indian culture's understanding of life. Most of us believe in the idea of being born once and dying once. This is what our basic biology teaches us. You know...born, live, age, die, and decompose. Some of us believe in being reborn just one more time. Like Christianity and the concept of the afterlife. Heaven and Hell... and from that point it's eternal...right? Some of us believes in being born once and not dying...immortality...

And then, there's the Indian understanding of life and death, which is actually a loop. We will dig a bit deeper into this next time.