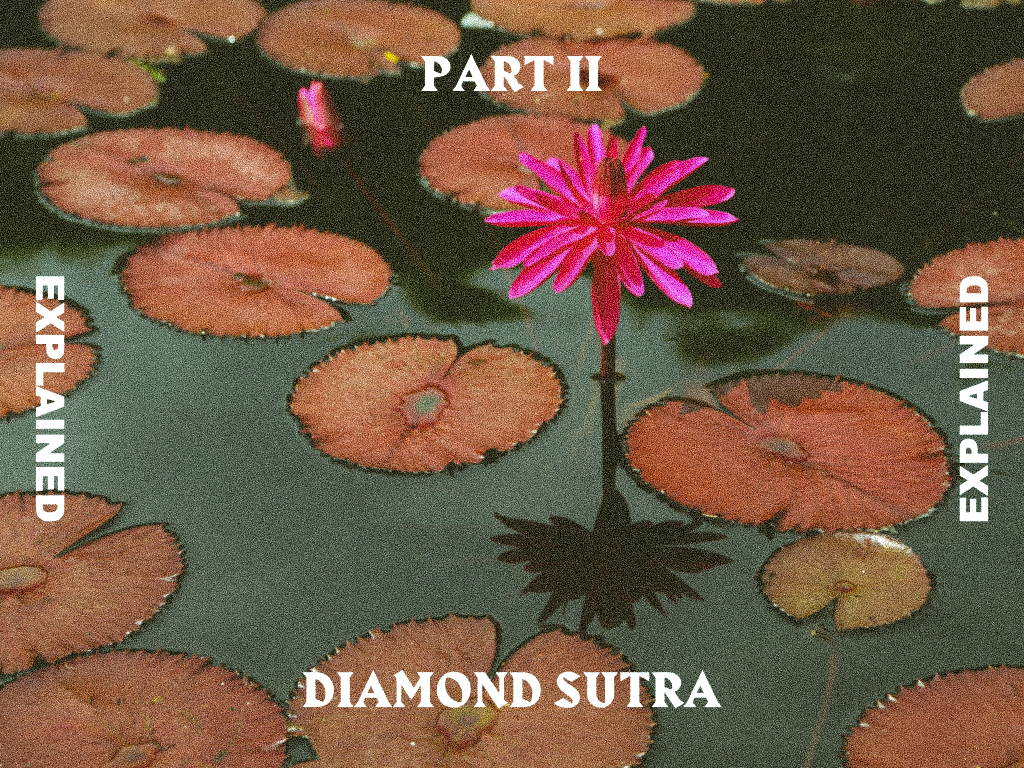 THREE PERSPECTIVES OF LIFE AND DEATH

Last time, I briefly introduced you to the Diamond Sutra. The composition of its name and the meanings behind it. This time I'm going to dive in a little bit deeper, and explore the ways in which we perceive life and death. This is very important in understanding any text from Buddhism because many logics are built upon this.

In each culture, there is a way to rationalize life and death. Some more popular than others, and usually, it's some sort of belief system. But the question has always been pretty plain and simple. What happens when we die? Right? Well, I summarized it into three perspectives. For convenience sake, I named them "One Life Theory", "Two Life Theory", and "Three Life Theory". Most Indian cultures including Hinduism believes in the Three life theory. And of course, in Buddhism, logics and premises are based on the three life theory.

But let's go through it one by one.

As the name implies, life is limited to the timeframe of a lifetime. In other words, you're born and you're eventually dead...and that's it. Nothing more nothing less. There is absolutely nothing that facilitates or constitute the existence of self before birth, and death means that our existence as a conscious being is completely over. The idea of death is so absolute in both physical and spiritual ways, there is nothing beyond this point. The idea of YOLO pretty much sums this up. This is what the majority of people believe in. You might think that there are so many scientific tangible evidence proving this theory to be true, there's no point thinking anything beyond. But bare with me.

What are the characteristics of those who believe in this theory? Well, the most obvious one is that people who hold this perspective are more likely to be terrified of death. Now, I'm sure that some of you just thought that I believe in "One Life" and I am not afraid of death! Well, that's probably because you haven't faced it yet. When a person truly faces death, and this person is absolutely certain that this theory is true...than death must be scarier than anything in this world. Another thing is that those who believe in "One Life Theory" has a particularly strong sense of urgency. Because life is merely a few decades up to a century or so, we all got to go the extra mile to make any level of accomplishments, which ultimately doesn't matter because once you die, you die. The concept is heavily reliant on the idea of what you can do in this life due to its fundamental limitation of time.

Also, people who believe in this theory tend to have fun. Live the moment. Sounds pretty good right? But the problem is they often pay little attention to consequences. One of the greatest regrets of those people is to die with too much money unspent. You know, because it's not like you can take that money with you. Their life is often desire-driven, and profit-seeking. I have nothing against that because it's inevitable. If you live once, you might as well get what you can and live the best life possible right? Therefore, constantly satisfying the craving is important here. But it doesn't matter if you're rich or poor, financially or satisfaction wise, once you die you are equal. Zero.

In this perspective, selfishness is essentially the engine of living a so-called 'good life', but the morality aspect is sometimes seriously questionable. Because this theory also believes in the idea of getting away with wrongdoings. If you want to get the maximum benefit in the shortest time...throughout your entire life, there will be multiple points in time where the bottom line of your morals will be challenged. Especially, when you strongly believe that there is a chance of getting away. In fact, if you were guaranteed to get away, would you still do something wrong for your self-interest? Maybe not committing a murder, but perhaps something subtle and sneaky? Like backstabbing a friend...

In my conclusion: A country or a nation that has more than 80% of its population believing in this theory may have a powerful economy...may even appear to be happy...but there is always that emptiness somewhere deep down...and there will be a seriously chaotic moral standard when things go down.

For this one, I'm going to throw out an example. Western Christianity. Christians believe that death is not really a complete end of life. It's more like a process of abandoning the flesh. Say goodbye to the physical and material stuff. The spiritual aspect, or soul, is not dead. It's not dead but it will be judged...which will determine where your soul goes. When the world faces its end, Armageddon or not, all the dead and the living will face some sort of judgment. Like a selection process to pick out the A-team. And entering Heaven comes with some terms and conditions, which I summarized into four parts:

1) Believe in God. Pretty straight forward. it doesn't make much sense to let someone who denies your existence into your home. This is also why some of the evangelical Christians like Jehova's Witnesses invest time in converting nonbelievers. Anyway...this is probably the first iron law.

2) Believe in Jesus. Christianity believes that we must not only believe in the existence of God but also believe that God has sent his son Jesus to save us. To carry the sins of our world by sacrificing himself. We all know the crucifixion story. If you believe in God, but not Jesus...you're looking at Judaism.

3) Obey the Christian moral commandments. Yes. there are rules for how you should behave as a Christian.

4) Repent of all the Sins they have done in the past. Seeking forgiveness and salvation also seems to be an essential aspect. It's a way to show that you truly regret your wrongdoings.

From my understanding, those conditions are overall pretty essential in this monotheistic format. I think those four are well-constructed doctrines: At the end of the world, God judges you to go to heaven to enjoy the blessings. Otherwise, sentence you to hell and suffer eternally. And because the judgment is final, assuming that God won't make wrong judgments, there are no objections to appeal. So how we live the few decades of life is pretty important...no pressure...

It's interesting to think that something so permanent, a life in heaven or hell, is judged by only a few decades of life. Which is also why many Christians have a mindset of restraining themselves from carrying out wrongdoings and desire. The solid moral compass they possess can guide them to eternal happiness, so few decades of patience is not too much to ask for, really. The return from such a small investment is pretty good. In that sense, a person with a Christian faith and a person without behaves very differently. I mean, if you just compare the two theories so far, you can see how different they are.

Finally. So, how does Buddhism perceive life and death? Well, it expands on the previous theory. After we die and abandon the physical body and the spiritual factor remains alive as ever, the stream of consciousness passes on through reincarnation, transforming ourselves into another living body...which will ultimately be born again.

You might notice that it's not really three life here. You're not wrong. The three life refers to the past life, present life, and future life. Buddhism firmly believes that if you are living now, you must have lived before and that there will be a life after. This is especially relevant because the quality of each life is affected by the previous one. This is probably a good time to mention the concept of karma. We all know what karma is. Especially the bad ones. But in the law of karma, everything functions like a bank. Everything is accounted for and nothing you can escape. Paying off debts is how all the bad things happen to you. Getting ill, being poor, even being heartbroken by a lover. You caused some harm, and you pay off the debts by suffering. The opposite applies, where you do some good and you get rewarded.

It's also worth mentioning that in this logic, there is no supreme being actually rewarding you or making you pay. No supreme accountant here. It's considered to be a natural law that even the Buddha cannot disobey. So, at the end of the day, you are responsible for all the ugly and the beautiful happening in your life, and of course the next one too.

Now that I have introduced you to the three life theories, let me explain the purpose of clarifying those views. I hope you had some time to think about which theory do you believe in. Most of us don't spend enough time thinking about life and death. We kind of just wait until we're eighty and realize that we are going to die sometime soon.

So here's an opportunity. Because this will affect how you live your life.

Some people say that it's difficult to make a choice from these three theories. So can I partially believe in all of it? Not really. It would be illogical. If you believe in nothing beyond death, how can you expect to go to heaven or reincarnate?

But the hypocritical thing we often do is that we often use each theory based on conditions. When you see someone doing something bad, you might say that it's "bad karma"...or "you're going to hell for doing that"? But when you do something dirty, you might have a YOLO moment, and think that might as well do it because you only live once.

One way or another, I think that we all believe in one of the three theories. So take a moment to think about it.

Or just stay blind to it...and figure or not figure what will happen after death.